90% of Bottled Water Is Contaminated

Plastics are useful for so much in this world. The management of the waste must be drastically improved if we want to keep this world a safe and healthy environment. The World Health Organization (WHO) has announced a review in the potential risks of plastic in our drinking water. They released a new study which reviewed some of the worlds most popular bottled water brands. Their findings conclude that more than 90% of the bottles contained tiny pieces of plastic. This study analyzed 259 bottles from 19 locations in nine countries across 11 different brands and found an average of 325 plastic particles for every litre of water being sold.

According to the Guardian, scientists responsible to analyze the water mentioned how they “found roughly twice as many plastic particles within bottled water” compared to their previous study on tap water found here. As you can see in the graphic below, 94.4% of tap water samples in the US contained plastic fibres. Now, thats a staggering statistic for a neighbouring country! Overall, 83% of the samples were contaminated with microplastics. 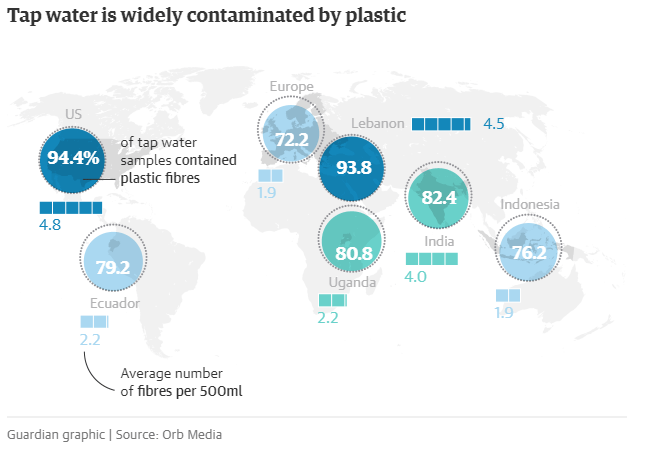 The Guardian interviewed a scientist conducting relatable studies and she said that this arises two concerns: very small plastic particles and the chemicals or pathogens that microplastics can harbour. Also, it was stated how microplastics can attract common bacteria found in sewage. She commented how “some studies have shown there are more harmful pathogens on microplastics downstream of wastewater treatment plants”.

How is all this plastic getting in our water?

Orb Media has a very informative article on “Invisible Plastics” and everything we need to know about them. Most notably, they gave insight as to how microplastics get into our drinking water. The most common areas of contamination include:

So… What do you think?

A world health organization spokesman told The Guardian that although there wasn’t yet any evidence on the human health impacts, it’s obvious that this is an emerging concern and shouldn’t be neglected. Often times, the impacts only become clear after years of damage has been done – like with pesticides, climate change, and air pollution.

We would love to hear from you. Leave a comment below to let us know what you think about this pollution!

We have your back

We care about your safety and hope you are drinking clean water in your homes and on-the-go! We can test for all the contaminants listed by the Canadian Drinking Water Guidelines. It doesn’t stop there! We test on all sorts of matrices and offer more tests than our online store can handle.
Don’t be shy to contact us to discuss how to partner on your next testing project, or visit our online store to order analysis of contaminants in water, food, and soil, so we can help make you and others safer and healthier by the testing services we do.

No other information about this author.

What test are you looking for?